The odds were that, with four entries in a field of six older fillies and mares, Linda Rice would take a trip to the winner’s circle after Aqueduct’s featured $100,000 Correction Stakes. In the end it was her lone New York-bred who took her there.

Lady Sheila Stable and Iris Smith Stable’s Startwithsilver (Jump Start), whose late-running style fit the race shape to a tee, mounted a perfectly-timed rally to win the race from off the pace by a neck.

Third in the 2018 renewal of the six-furlong Correction to Sounds Delicious – also a Rice-trainee who was back this year to defend her title – 6-year-old Startwithsilver was looking for her first win since last April 8, when she annexed an open second-level allowance race. The grey’s strong record at Aqueduct, where she had won four of six starts, along with a closing style in a speed-laden field, drew the support of bettors, who sent her off as the 5-2 second choice under Junior Alvarado, who had piloted her to three prior wins, including the Broadway Stakes last year.

In the early stages Startwithsilver raced at the rear of the field in tandem with relative longshot Honor Way, while speedy fellow-New York-bred Filibustin shot to the front from her outside post, leading the field by a length through an opening quarter in 22.64.

As the field made its way along the backstretch and around the far turn, the first flight closed ranks on Filibustin. Once the half went in 46.28, Sower and Sounds Delicious lined up with the leader across the track.

Startwithsilver, now in fifth with a five-length deficit to make up, began to forge a path to the finish line eight-wide. In a perfectly timed move by Alvarado, she struck the lead in the final sixteenth before going on to win by a neck in a final time of 1.11.19. Yorkipoo Princess closed into second, while Sounds Delicious stayed on for third. Completing the order of finish were Sower, Honor Way and pacesetter Filibustin. [VIDEO REPLAY].

Startwithsilver began her 6-year-old year finishing fifth in the Broadway Stakes on February 16. The supposition that she needed the start after eight months on the bench, was confirmed by Rice, who added that she believed the mare was primed for a big effort in the Correction.

“The last race [Startwithsilver] ran, I had her at around 80 percent ready,” Rice said. “She ran decent, but I knew she was ready today. I thought we might have a wet track, which she loves running on. We didn’t get it, but I was really impressed with the way she ran on a dry track the way she did.” 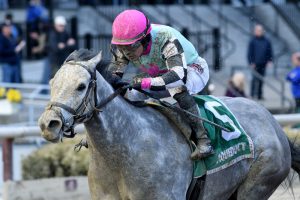 Alvarado commented, “I had to play it by ear. I didn’t want to leave her with too much to do. At the same time, she’s one of the only horses in the field that likes to run from behind, so I kind of had to sit early and hope for a fast pace.”

He continued, “They were moving, but they weren’t really going that fast up front, so that’s why she wasn’t too far back. I tried to save some ground and when I put her in the clear she started picking it up and giving me a nice run. She likes to run on the outside and I always have to time it with her, because sometimes when she gets to the lead, she gets a little lost. She did everything right today and we got there in time.”

Startwithsilver began her career on the green, making 11 of her first 13 starts on grass – and with good reason: her dam Office Miss won three turf stakes. In her fourteenth start at the beginning of her 5-year-old campaign the grey made a full transition to dirt sprints and found a niche for herself. She won through her state-bred second-level allowance condition and won last year’s Broadway Stakes in her stakes debut with a last-to-first move. She also collected placings in last year’s Correction and Pimlico’s Skipat Stakes.

Bred by Burning Sands Stable and foaled at Rockridge Stud in Hudson, Startwithsilver, was purchased as a yearling by Raul Reyes’ Kings Equine at the 2014 Fasig-Tipton Kentucky fall sale for $32,000. Rice picked her up at the 2015 Ocala Breeders’ Sales Company’s Spring sale of 2-year-olds in training for $180,000. She is the final reported foal for her dam Office Miss, who produced five winners in all.